Early in the morning of a misty October day in Vienna, Eliud Kipchoge of Kenya ran the marathon distance in less than two hours. His time, 1:59:40, is the fastest time that any human has ever covered 26.2 miles, becoming the first runner to ever break the two-hour barrier.

In becoming the first to ever cover the marathon distance in less than two hours, Kipchoge achieved a milestone once-considered impossible to achieve, akin to when Roger Bannister became the first person to break the 4-minute mile in 1954, with a time of 3 minutes and 59.4 seconds.

Critics are quick to point out that Kipchoge, an eight-time major marathon winner and three-time Olympic medalist, did not run under “open marathon” conditions and as such, his feat should not be recognized as an official world record.

But no matter the critics, the accomplishment was one that required an incredible amount of planning and skill, and one that all investors can learn from. Let’s explore.

Kipchoge Had a Very Specific Goal

Kipchoge owns the two fastest times in sanctioned marathons when he posted world-record times of 2:01:39 in Berlin in 2018 and 2:02:37 in London. But he had another goal for his race in Vienna. And it was not to just run a sub-2-hour marathon.

Also, Kipchoge added a perspective that further fueled his very specific time goal when he said:

As an investor, how precise are your goals? And remember, saying something along the lines of “I want to retire with more money” is not a goal. It needs to be specific and measurable.

Kipchoge Had a Team Working for Him

Kipchoge did not run alone. In fact, he had one of the most advanced teams a runner could hope for. In addition to corporate support from INEOS, one of the world’s largest chemical producers as well as sports-giant Nike, Kipchoge had a running team designed specifically to help him achieve his goal:

Most importantly, Kipchoge’s pacemakers formed a protective, aerodynamic wedge around him, with five of the pacemakers running in front and two more in the back. These seven pacemakers would be replaced by a new group of seven with fresh legs. Further, they knew exactly where to run thanks to green laser beams projected onto the street by the timing car.

Investors need teams working on their behalf and working specifically toward their goals too. In addition to the need for a financial planner, investors often need a team of experts, including money managers, tax experts, lawyers, and accountants.

Kipchoge just didn’t pick any course to run, he picked a location and course that would be best for him to achieve his goal. He and his team settled on Vienna due to its Goldilocks environment. It wasn’t too hot, too cold or too hilly.

Kipchoge ran a course that was 90% straight with portions of the road painted with lines to highlight the fastest possible path. He didn’t need to think about the running-technique called “running the tangents” at all. He followed the line.

Similar to how investors need to “follow the plan.”

Kipchoge Had a Good Day

Every investor knows that some days are better than others, as are some months and some years. And while we might not ever know for sure, Kipchoge would likely have tried again had he failed. But he didn’t fail.

Long-term investors should heed the words of Jim Ratcliffe, the founder of INEOS, when he told Kipchoge:

“There are no guarantees in sports. You could have had a bad day. But you had a really good day.”

Kipchoge Had the Support of His Family

In a scene that will be replayed millions of times on YouTube, Kipchoge crossed the finish line and excitedly jumped into the arms of his family.

But what most don’t know is that despite all the years of running, all the wins, all the medals, and all the world-records, this was the first time his family had watched him run in person.

Without question, Kipchoge’s family has sacrificed over the years and it was only fitting that they could share the world-stage as a family. And their celebration highlights the importance of planning as a family and celebrating as a family. Because financial planning will require goal-setting and decisions that are best made together.

Kipchoge Had a Dedicated Coach

Most of the stories covering Kipchoge’s incredible feat will pay little attention to an important detail – the fact that Kipchoge had a coach.

Patrick Sang is Kipchoge’s 55-year old, long-time running coach and was also an accomplished runner himself. He ran in college at the University of Texas and won a silver medal at the 1992 Summer Olympics. He does not seek attention or accolades, but he’s very driven to help his athletes achieve their goals and dreams.

Kipchoge summed up the importance of his coach perfectly when he said of Sang:

“He has taught me the morals of life, how to really concentrate and be happy and not go off course. He’s a mentor, a sports coach, and my life coach.”

It sounds a lot like the hallmarks of a great financial planner. 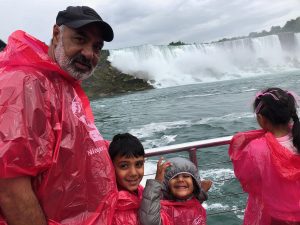 The Best Summer Ever